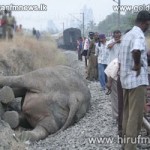 The Police Headquarters announced that three elephants have died after being knocked down by a train near the Mee Oya Bridge in Ambanpola.

The Railway Control Room stated that two cow elephants and a calf have been run over by a train plying from Anuradapura to Colombo, this morning.

The statement added that the train services have not been disrupted due to this accident.