They have been hunted, shot, poisoned, blasted with trap guns and grievously injured through different forms of cruelty. The latest “unwitting” viciousness foisted by man on elephant seems to be the snare.

Ironically, it is not meant for them but to catch wild boar and deer, but many are the elephants which get caught in snares and suffer agony until a prolonged and painful death. 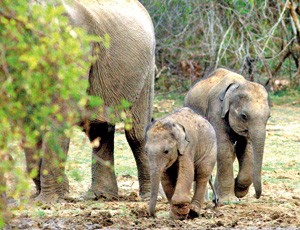 The use of madu (snares) by poachers is proliferating and many babies and adult elephants are getting caught in them and cut severely leading to much suffering and terrible death, says Dr. Prithiviraj Fernando of the Centre for Conservation and Research, who has seen their agony and suffering.
The cable and wire snares sometimes cut through the trunk of the babies, making it impossible for them to take in food and water. If a leg gets caught, the cut is deep and sharp going through to the bone itself. A large swelling follows while the restricion of circulation to the limb causes gangrene to set in followed by an agonizing death, the Sunday Times understands.

Snare-traps are common in most areas and also Protected Areas although it is illegal to use them, points out Dr. Fernando, creating the image of how cattle which get caught break their necks. (Protected Areas are areas of land or sea that are especially dedicated to the protection and maintenance of biodiversity/natural resources, and managed through legal or other effective means.)
The barrage of weapons used by man seems to be getting worse, said a conservationist referring to hunting, trap guns, poison, hakka patas and planks with nails.

While hakka patas hidden in pumpkins will blow out the jaws of the elephants when they bite into it, planks with nails driven into them with the sharp points up will make them suffer while their nail-embedded feet rot, it is learnt. 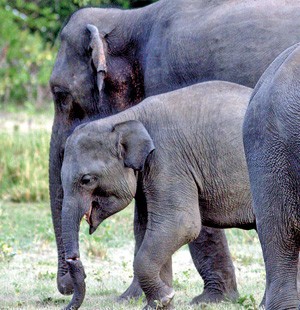 Bringing the legal aspect into focus, environmental lawyer Jagath Gunawardena said that causing injury or death or capturing or keeping a protected animal such as an elephant is an offence with the penalty being as much as Rs. 100,000 or Rs.150,000.

It could either be “intentional” or “accidental”, he said, pointing out that both were offences. However, arresting the suspects who did harm and caused injury to elephants was the difficulty.
There should be awareness within the village communities of the dangers posed by these tools of cruelty, said another conservationist, adding that the people themselves must feel that it is wrong and put a stop to it and also frown on those who do it. In any village, the people know who sets the snares.

Ironically, although many are the vicious methods that humans use to vent their anger against wild elephants, the highest honour in the country, the carrying of the karanduwa (casket) of the Dalada Maligawa in Kandy is also bestowed on these majestic creatures, a source pointed out.
Until such time as the people decide to take it upon themselves to protect wild creatures, the love-hate relationship between human and elephant seems to have taken a turn for the worse, with the elephant being at the butt end of viciousness, with no voice to trumpet out its protest and sorrow.