It was a double tragedy – the bullets not only killed the cow-elephant but also the unborn baby she was carrying at Demaliya, close to the northern boundary of the Lunugamvehera National Park last Wednesday. 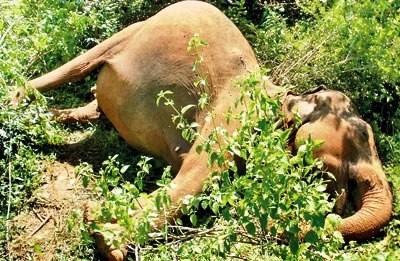 Gunned down by a home-made shot-gun, within an area cleared for chena cultivations, when officials of the Department of Wildlife Conservation (DWC) rushed to the area on information received from the villagers , the cow elephant with severe gunshot injuries to the head was already dead, the Sunday Times learns.

The cow elephant was about 25 years old and the foetus about 21 months old, said DWC’s Veterinary Surgeon Dr. Vijitha Perera who performed the post-mortem. When contacted by the Sunday Times, Dr. Perera who covers the Southern and Sabaragamuwa Regions said that if the mother was not killed the baby elephant would have been born in about a month. This was the third baby of the cow-elephant, he added.

Anguished conservationists were strident in their calls for the urgent mitigation of the human-elephant conflict.

In another sinister tale, the Sunday Times learns that the DWC has in its custody at its Anuradhapura Office a baby elephant which had allegedly been illegally captured for domestication by still unidentified people who on hearing that the DWC was on their trail abandoned it close to Asirigama in the Palugaswewa area.

When DWC officials set up a cordon, on hearing of the attempt to smuggle the baby elephant from the Asirigama area, the culprits had tied the baby to a tree in the scrub jungle leaving a few water melons by its side, before making good their escape, it is understood.

They may have been planning to come back when the heat was off, a DWC source said, adding that the baby is a female of about one and a half years. It may have been illegally captured by either killing the mother or when it fell into a waterhole in the jungle.

Many conservationists were of the view that the Asirigama area is notorious for alleged attempts to illegally capture baby elephants. The modus operandi seems to be to capture babies and then introduce them as having been born to captive cow-elephants, they said.