Now Elephants get knocked over by trains..

Home » Stories » Tragedies and Conflict » Now Elephants get knocked over by trains.. 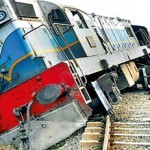 Train derails after crash into jumbo Monday, 14 March 2011 00:00 By Amadoru Amarajeewa A train which was travelling from China Bay to Gal Oya was derailed after crashing into an elephant on Friday night. The train services between Trincomalee and Thabalagamuwa were affected as a result of the accident. All trains travelling from Colombo Fort to Trincomalee terminated at Thabalagamuwa yesterday evening. The body of the elephant was found near the railway track with serious injuries, sources said.