Elephants still lurking around in Sinharaja

– the full, unabridged article appearing in the Sunday Times of 3rd April 2011

It is a known fact that wild elephants were found in most parts of Sri Lanka during early 1900’s. However, with the rapid development of the South and South West regions, these wild elephants gradually moved away, towards the Central, South Eastern and North Eastern regions. With the rapid development of the Tea Plantations, the elephants living in the Central Hill Country also moved away into the Central East or were decimated in the course of the development. However, there has always been speculation that a few stragglers had been left behind, specially in an around the world famous world heritage site of Singharaja forest, situated in the South Eastern part of Sri Lanka.

In late 2008, much to everyone’s surprise, a well built mature male elephant was sighted on just outside Singharaja forest, in the Ensellwatta Estate, on the South Eastern side of Sinharaja. The staff was fortunate enough to take some good photographs of the elephant as he nonchalantly walked up to the circuit bungalow, and then continued along the estate road.

Sinhabahu near the circuit bungalow at Ensellwatte estate circa 2008

He has been named ‘Sinhabahu’ and he sprouts two distinct small ‘tushes’. Tushes, not to be mistaken with tusks, are also teeth, but do not grow more than a few inches. A male without tushes or tusks is called a ‘Pussa” in Sinhalese, while a female without tushes is called a ‘Alidena’. A female with tushes is called a ‘Athinne’ ( ref: Jayawardene.J -The Elephant in Sri Lanka ) Singhabahu was not sighted after this and many of us felt that he may have also met an untimely death, being isolated in this region.

However, most of us elephant enthusiasts were thrilled to hear that Singhabahu has made another appearance a few days ago, ( Monday, 28th March to be precise) at exactly the same place he was sighted three years ago, near the circuit bungalow at Ensellwatte eastate. 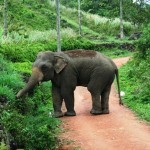 Walking along the estate road -2008

He seems to be in good physical health and this time there is evidence of him being in ‘musth’. Musth is a physiological condition that affects mature male elephants periodically, where there is a surge of the testosterone levels in the elephants’ body. This causes heightened sexual activity, while a strong pungent fluid is secreted from the elephant’s temporal gland, leaving a dark stain along the side of his head.

Unfortunately, this time around the staff have not been able to take a good photograph of him, but the poor grainy photograph that they did manage to take, clearly shows his main identification marks, his two small tushes. The musth secretion is also quite evident as a dark dry stain near his eye, indicating that he may be just coming into musth, or that he may be at the tail-end of musth. 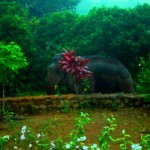 More excitingly, unverified reports coming in on Wednesday (30th March) indicate that another mature elephant has been sighted in the Patana Division in the adjacent estate. This is indeed something very unusual, and exciting, since this indicates that the 2-3 elephants are said to be living in the Singharaja area seem to be still alive, and doing well.

It is important to educate the estate labourers and the staff of the need to protect these unique specimens from any harm. Un-like other human elephant conflict areas, there has been no reported incidents of any conflict whatsoever so far in this area. This is to be expected because the sightings are very rare and far between. However, on the occasions one of these elephants do come into one of the estates they must be given space to move along, and allowed to go on their way without any altercations.