You And I, We Are All Guilty

Home » Stories » Featured Posts » You And I, We Are All Guilty

We are killing the very goose that lays the golden egg: our natural environment and its resources, by our short-sighted actions, warns Dr. Sriyanie Miththapala.

In the last few weeks, the in boxes of many concerned for the environment have been full of emails about the state of Yala National Park. With these emails were many pictures of traffic jams reminiscent of Thummulla junction at rush hour and showing visitors violating basic rules that should be followed in a national park. We all know that Sri Lanka’s natural wealth is in trouble. We all know that the rich array of habitats and the diversity of species found on this island have been battered and beleaguered by human actions. We are killing the very goose that lays the golden egg: the natural environment and its resources.

Within the context of an ever-present demand for development and a human population with ever-increasing needs, habitat loss is rampant. We have destroyed much of the island’s forests in the second half of the last century, leaving less than quarter of the island under forest cover now. In order to cultivate faster, yield better harvests and perfect crops, we have poisoned the earth with chemicals. We have indiscriminately introduced species that have run amok in our native systems.

The Clown Knife fish — introduced as an aquarium fish, now escaped into wet zone streams — is eating up our endemic freshwater fish. Other intruders such as Lantana in Udawalawe, Mesquite and Prickly Pear in southern Sri Lanka and Giant Mimosa in the Mahaweli region are all wreaking havoc on our natural vegetation.

And we simply take too much from the environment, diminishing our natural resources.We selectively cut down valuable timber species — such as Calamander (Diospyrosquaestica) and Nedun (Pericopsismooniana) from the wet zone and Ebony (Diospyrosebenum) and Satinwood (Chloroxylonswietenia) from the dry zone — drastically reducing their natural populations. Plant species valued as medicines — such as Salaciareticulata (Sinhala: Kothalahimbutu; Tamil: Ekanayakam) and Cosciniumfenestratum (Sinhala: Veniwel-gata; Tamil: Veni-welkattai)— are being over-collected.

Leopards are killed for their skins; spiny lobsters are caught for food; sea cucumbers are over-harvested for export; elephants are killed because of conflict for space with humans, and sloth bears and snakes, out of fear. Many endemic freshwater fish, such as the Black Ruby Barb (Puntiusnigrofasciatus) and the Golden Rasbora(Rasboroidesvaterifloris), have been over-collected for the ornamental fish trade.

Watching wildlife is a form of use, though indirect. Yala is a text book example of over-use of a natural resource. According to the Sri Lanka Tourist Development Authority, in 2011, there were nearly 100,000 foreign visitors and twice as many local tourists. There can be as many as 75 vehicles within Yala Block I in a given session. The all-time record according to the Daily Mirror was February 13, 2013, when there were 1,500 visitors on one day.

These numbers in themselves are troublesome because this many vehicles increase air pollution, cause traffic jams, disrupt animal behaviour and increase opportunities for conflict with large mammals — such as elephants. 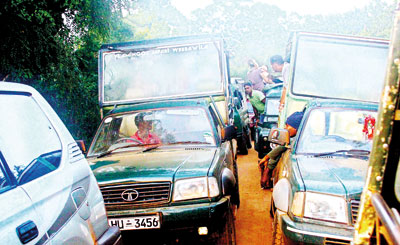 When irresponsible behaviour is combined with this over-visitation, the situation becomes dire and sometimes dangerous. It is reported that when the Yala park gate is opened, queued vehicles speed inside to get to vantage spots. Others, notified by mobile phone of a sighting, race to converge on some hapless animal. Yet others, reluctant to leave the Park at the designated time in the evening, wait until too late and then rush to leave the Park. Speeding results in fatal collisions with wild animals. Leopards and a sloth bear have recently been killed by irresponsible driving within Yala.

Another practice prohibited in national parks, but quite common in places such as Bundala National Park, is off-roading. Off-roading involves driving off designated paths, over vegetation and breaking off branches to forge a pathway. This not only damages the habitat but also disturbs refuging and nesting animals. ?Standing on the roofs of vehicles, getting down from vehicles although it is prohibited, and feeding wild animals are all behaviours that are now reportedly common in Yala.

Recently, there was disturbing news of a wild elephant in Yala, called Gemunu, fed by jeep drivers, who had then taken to helping himself to food inside jeeps. ?The behaviour of visitors to Yala has spun wildly out of control, but there are other, as worrisome, trends in wildlife watching.

Whale-watching in Mirissa is turning out to be the aquatic equivalent of Yala. After a media-blitz that promoted whale-watching in Sri Lanka, the number of boats and visitors has been steadily increasing. Although whale-watching guidelines recommend a 100 metre space between a boat and a whale, and making an approach parallel to the whale, many boats do not adhere to these guidelines. Often, even if a boat is idle at a safe distance, other boats sneak in front. The net result is that a whale is surrounded by boats. A study published last year by Anouk Illangakoon — a whale and dolphin specialist — has shown that there has been a small shift offshore of whale sightings between 2008 and 2011, i.e., the whales have moved further out to sea. 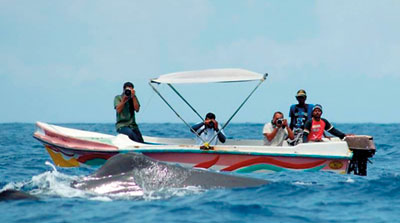 We Sri Lankans, supposedly patriotic, but in no way civic conscious, leave a trail of rubbish wherever we go. The Strict Nature Reserve of Ritigala, into which no one is supposed to go, is polluted with trash. The Knuckles area, unique because of its mosaic of habitats and high endemism, is visited heavily by local tourists who leave behind trash, pollute the waters and damage habitats. Horton Plains National Park, the only national park in which visitors can walk, visited by nearly 200,000 local and foreign tourists last year, is suffering from the effects of this heavy visitation. Littering by visitors has resulted in the increase of crows in the area, which not only eat the garbage left behind by humans but also feed on easily visible, basking, endemic Black-cheeked lizards (Calotesnigrilabis) found only in submontane and montane regions of the island and nowhere else in the world. I remember a sad incident where a female sambur, with a bowel impacted after eating a sirisiri bag that had been carelessly tossed away, died overnight outside the Seenuggala bungalow in Udawalawe before the vet arrived.

The situation is dire. The post-war increase in foreign as well as local tourists is destroyingthe goose that lays the golden egg.?So what is to be done? That regulations must be put into place and implemented strictly is obvious. We must pressurise tour operators into boycotting erring jeep drivers and boat owners; we must hope that the Department of Wildlife Conservation — official custodians of our wildlife — do a better job of implementing park regulations; we must lobby for better policing of the environment. But many laws are now ignored in our country and our record for implementation in the wildlife sector borders on the abysmal.

How many of us are careless about the trash we generate? How many of us are guilty of picking up shells washed up on the beach and taking then home to adorn our houses? Yet, each time we pick up a shell we are depriving the beach of material that one day will become sand. How many of us pick wildflowers simply because they are pretty? How many of us surreptitiously uproot ferns from Sinharaja or Kanneliya and bring them home to plant in our gardens? Surely we are different from others, because we convince ourselves that we do this because we love nature and in the name of conservation, not commerce?

To paraphrase Shakespeare, the fault is not in others but in ourselves. All of us, individually, are culpable in some way or another. All of us need to practise living conservation, and not merely opine about it. To do this, we need to examine our own behaviour.

In each of our actions, we need to be sure for ourselves that we are not overusing natural resources.There are resources — such as food, water and wood — that we need to be careful not to overuse, but we still need in our daily lives. However, there is a whole slew of other natural products that we simply do not need for our survival. There is a myriad of horticultural plants, so why do we need the rarest orchid from deep inside a rain forest in our garden? Similarly, when there are many pretty fish bred specifically for ornamental use, why do we need the endemic Black Ruby barb in our fish tanks? Even when we buy beautiful seashells or jewellery made of coral, we are encouraging the further ravage of coral reefs.We must ensure that when we use natural resources we do not plunder the environment.

We need to ensure that our direct and indirect use of the environment is exemplary. When each of us visits any natural habitat we must ensure that we minimise the disturbance to any animal and we leave it exactly as it was before, without having stuffed our proverbial pockets and left behind our ubiquitous trash. In our daily lives, our actions must also reflect this stance.

As Mahatma Gandhi said let us all be the change we want to see.