Rambo is Back on the Uda Walawe reservoir Bund

.Returning form Ella last week, I decided to take the route via Thanamalawila and pass the Uda Walawe national Park, hoping to spot Rambo. And I was not disappointed. There he was back at his old haunt, on the side of the reservoir bund close to the electric fence. He was looking very old, and gaunt, the bones of his body visible on his emaciated frame. I reckon Rambo would not be more than 40-45 years at the most, recollecting the early days I saw him as a strong young bull in the 1980’s. His strong physical appearance was what earned him his name, but with his placid and quiet demeanour, he never lived up to the character of his counterpart celluloid namesake.

I inspected him at really close quarters and saw that his gunshot wound in the belly had healed well and there was no sign of any puss or festering. His belly bulge, possibly due to infected and accumulation of fluid, had also reduced considerably. He seemed to be having a small infection of his left eye or possibly it was a cataract that was forming. But otherwise he seemed quite all right, and readily accepted the bananas and other fruit that the passers- by were giving him.

But I did notice that he was now eating grass, in between his solicited ‘tit-bits’. This was still woefully inadequate, but was a good sign all the same, that he was supplementing himself with much needed vegetation and fibre.

As I gazed at him, and looked deep into his half-closed eyes, I realized that whatever we may try to do, Rambo’s days are now numbered. In fact I felt that we should let him be on the bund, where he has spent his last few years, rather than try to rehabilitate him back into the jungle by trying out various schemes, at this late stage of his life. We made him a ‘beggar’ by acclimatizing and habituating him to us humans. Now let us leave him alone. 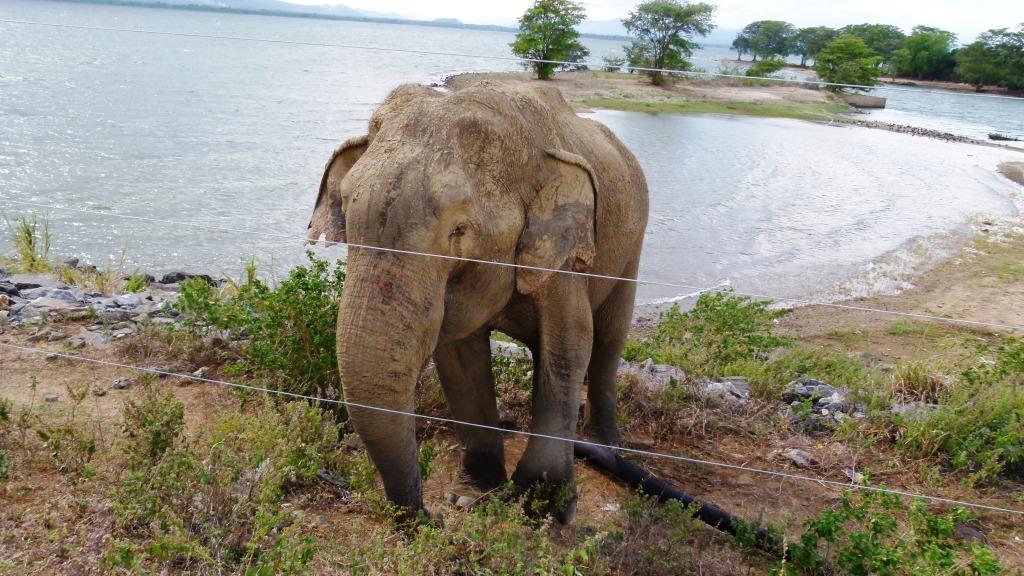 He is happy, and contented with life, watching the world go by, standing on the side of the bund, and still giving passers-by a one of a kind unforgettable experience of seeing a wild elephant so close up. He has done his bit to create awareness about the plight of his kith and kin to the world, and I think we should manage this situation, learn from the mistakes, and let nature take its course with Rambo, my friend.