Questions for the Dept. of Wild life re the elephant census….

Home » Stories » Other » Questions for the Dept. of Wild life re the elephant census….

COUNTING ELEPHANTS NOT THAT EASY

1. Was this project a ‘census’ or a ‘population estimate’? There appears to be some confusion about the very focus and objective of the programme. Some officials at the DWLC have conceded to me ( off the record) that this was only ‘an rough estimation of the population’ while some of the experts who have been involved in the project say this is was to study the population structure, and that the count was actually a by- product. Needless to say that if the overall objective of any project is ambiguous, then all the strategy, plans and methodology that follows, will also be flawed.

2. Given that the methodology applied was exclusively ‘water hole based’ how accurate was the count (if it was a count)? In utilizing a ‘quick and dirty’ method such as a water hole study, that too, over a short period of 72 hours, what is the accuracy of the estimate arrived at? Surely anyone knows that using a quick and easy method for evaluating something, will yield approximate results only. I am not in any way debating the methodology at this late stage. There are times we all have to use an approximation to arrive at some result. All I am saying is that we must know what the error margins are! How can we say that there are today 5,879 elephants, down to the last integer, when a very broad based approximate method was utilized for the ‘census? I would have been happier with ‘approximately 5500-6000 elephants ‘perhaps. 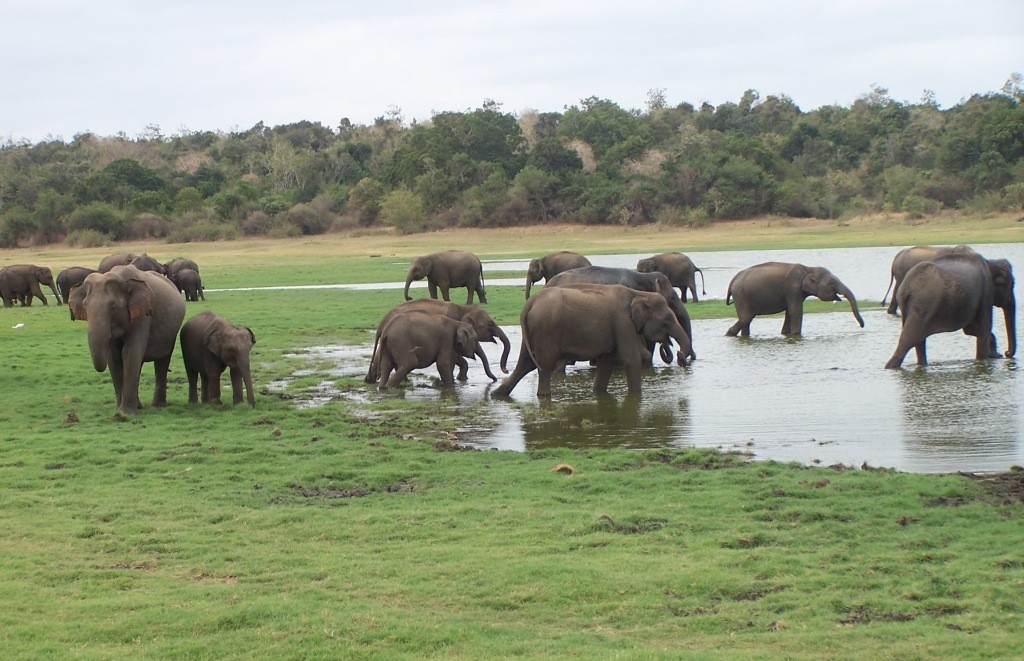 3. How were the 987 males identified? Anyone who understands elephants in the wild will agree that distinguishing between males and females is the one of the most difficult things to do. Even seasoned experts sometimes make mistakes, because unlike in most other animals, the elephant’s external genital differences are not at all prevalent and obvious. So how some 3,000- odd, hurriedly trained ‘farmers, service personnel, and villagers’ undertake this feat in a short time span of 72 hours? I have very serious doubts about the accuracy of this information.
4. How many water holes were covered? A cursory glance at an irrigation/waterways map of Sri Lanka will reveal that the island, especially the north, north east, north western and eastern areas are pock-marked with an array of small water ways and tanks. This is to be expected, since Sri Lanka once boasted of some of the most advanced and complex irrigation networks in the world at that period of time. And it is a well-known fact that these areas are the main wild elephant habitat. We also know from reliable scientific study that some 60-70% of all wild elephants live outside national parks, in these very same areas. So I am at a loss to comprehend how all these tanks and water ways could have been ‘covered’ in just 3 days. I believe that there would have been a very large error margin, on the negative side ( i. e. undercounting )

5. Can you confidently say that there was no double counting? Elephants are known to travel great distances in short space of time, if and when they decide to do so. A single animal could travel up to 50-60 kms in a day while herds may move some 30 kms or so. So there is a very real possibility that some elephants who were counted at one water hole, could be seen in another water hole in the vicinity, a day or two later. Unless there is some distinguishing feature of a single animal (like a broken off tusk, or deformity) it is very difficult to identify individuals, to the untrained eye. So I am of the opinion that there could be a large error margin, this time on the positive side (i.e. over counting) .

6. How can you say that the population is healthy? The state of the heath of an elephant population or herd is judged, not by the number of calves alone. (In this case supposedly some 1,100 calves have been recorded, which is about 18% of the total of 5,879 is counted. A healthy elephant population should have a good balanced ratio of adult bull elephants and mature cows, a reasonable amount of sub-adults, as well as adolescents, in addition to calves. A preponderance of calves only, may actually indicate a more serious situation, where although reproduction may be taking place, the calves may be dying off before they grow up.

7. If the count in the south of 1,086 elephants includes Yala and Uda Walawe National parks, there are some serious errors in this data (there seems to be no other area they can be categorized into in the DWLC analysis- and no clarification could be obtained from the DWLC when writing this article) It is interesting to note that according to the information released by the DWLC, the south records 1,086 elephants where there are two national parks well known for elephants.

At Uda Walawe National Park (UWNP) there is currently today, one of the longest on –going research programmes, which is studying the population dynamics, social behaviour and vocal communication of elephants. In this study, led by Dr Shermin de Silva of the University of Pennsylvania, with the affiliation of one of the foremost elephant experts in the country Dr Devaka Weerakoon, it has been revealed that the UWNP ALONE is carrying between 800-1160 elephants, both transient and resident. This is the data based on a laborious 5 yearlong study, by some world renowned scientists at UWNP (http://elephantresearch.net/fieldnotes/2011/05/26/how_many_elephants/). It is also pertinent to note, that after 5 years of studying the elephants, day -in and day- out, in a confined space of approximately 350 sq km (the area of the UWNP) these scientists are still cautious of giving exact numbers, and quote “ 800-1160”. The DWLC study on the other hand, covered 65,000 sq km (the total area of Sri Lanka) in 3 days, utilizing farmers, service personnel and a few experienced DWLC field officers and rangers, and comes up with a figure of exactly 5,879 elephants in Sri Lanka!

8. How were the 2 elephants said to be in the Sinhraja region counted? There definitely are a few elephants left in the Sinharaja region, and I myself have seen two of them, in the buffer zone on the Deniyaya side. But there are no ‘water holes’ in this area! I actually have no issues with this count of 2, but the point I am trying to make is that there is a serious confusion and ambiguity in this whole process. My reading is that this estimate of 2 elephants in the Singharaja area was based on hearsay and ‘guestimates’ and were actually not sighted or counted.