An elephant said to have the longest tusks in Asia has died in Sri Lanka. The animal, named Millangoda Raja, was about 70 years old and had served in a ceremonial capacity for several decades in the city of Kandy. Many Asian elephants, smaller in stature than their African cousins, fail to grow tusks at all. But Millangoda Raja’s tusks were so long that they reached to the ground.

There are now plans to stuff the dead elephant and put him on public display. His owner, Appuhami Millangoda, recalled that Millangoda Raja had been among a batch of elephants he and his friends had captured in north-west Sri Lanka in 1945. Buddhist funeral “The elephant was small compared with the others when we caught him – just four or five feet tall – and very cute,” he told the BBC from the town of Kegalle. “That’s why I brought him home. It took only two weeks to domesticate him. “I felt very sad losing him – it was like losing a family member.” 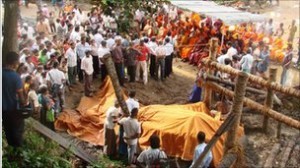 Millangoda Raja took on a major role parading in the Kandy Perahera, the huge yearly festival in the city of Kandy, famous for bearing a relic believed to be the tooth of the Buddha. “He was involved in the Kandy Perahera for nearly 40 years, and for 10 to 12 years he was the chief elephant at the event,” said the elephant’s owner. “His last appearance there was in 2008. We’ve been praying that he would get better so he could rejoin the Perahera.”

Millangoda Raja’s health deteriorated over the last 18 months and he was given funeral rites by a team of Buddhist monks. His owner said that his household’s four surviving elephants were showing signs of bereavement and behaving unpredictably. Speaking on TV, the lay custodian of the Temple of the Tooth in Kandy, Pradeep Nilangadela Bandara, said that the elephant’s death meant that there were only four tuskers remaining to take part in the Perahera, which could present problems for the festival and its culture. The festival is taking place this week.