Home » Stories » Other » ‘The Gathering’ – The Unknown Story

‘The Gathering’ (of elephants) at Minneriya National Park takes place from around June to October each year, and has today become a well-known phenomena in the world today. During the drought in the central province of Sri Lanka, some 150-250 wild elephants gather around this ancient man-made reservoir, covering approximately 8,900 hectares, which was constructed by King Mahasen in the 3rd century AD. This large reservoir fills up during the north-east monsoon around November to April each year. When the rain ceases, and the dry season begins, and the drought takes its toll, the water in the reservoir starts to dry up. Although the reservoir shrinks quite dramatically, it never really runs dry, and as the water recedes, it leaves behind fertile, moist soil where lush grass quickly sprouts. The entire reservoir is surrounded by scrub jungle, which opens out in the vast plains of the Minneriya tank.

This provides an ideal and unique refuge for wild elephants during the dry season, where there is abundant water, nutritious grasslands and also a ready-made forest cover to, retreat to when the afternoon sun comes too hot. 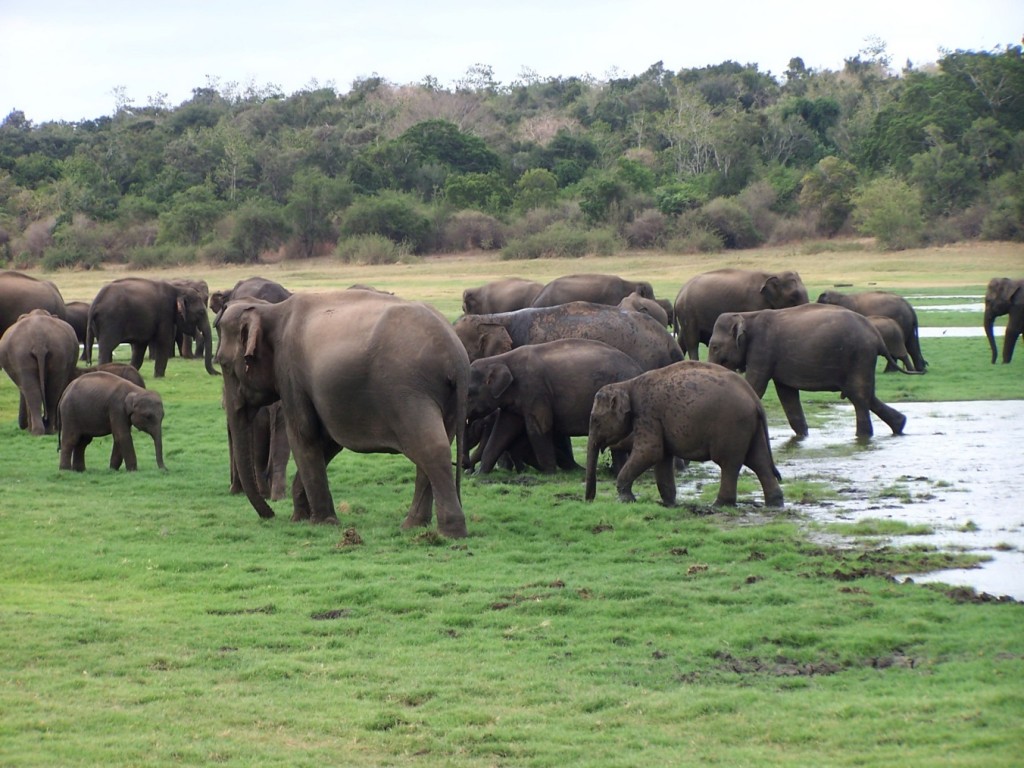 Over the years, ‘The Gathering’ has become one of the most popular attractions for visitors, both local and foreign, as is evident from the dramatic rise of visitor statistics of Minneriya park 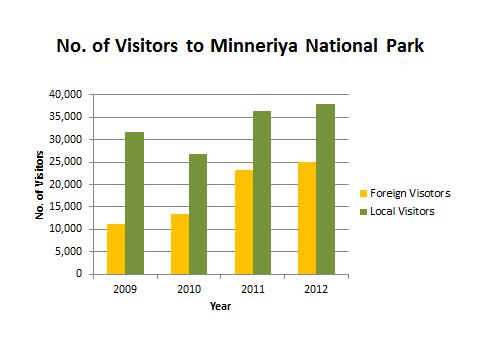 Internationally ‘The Gathering’ has been rated as the world’s 6th Greatest Wildlife Spectacles by none other than the prestigious Lonely Planet tourist publication.

Wild elephants may have been congregating in this location for decades, but given the lack of any attempt to count the numbers until recently, it is impossible to know how the numbers have changed over the last few decades, let alone centuries. A few local safari vehicles drivers were aware that during the dry season elephants could be seen easily seen here. But as small groups of elephants were encountered very quickly, the drivers would turn back very soon, and most tourists saw no more than a handful or a few tens of elephants. Very few tourists (and hence local safari drivers) waited on till late evening and drove around to the witness the large congregation that was taking place and had no inkling that the numbers were very unique and significant. The few who did stay behind till late evening and saw  large numbers, did not appear to have attempted to count, nor publicize the presence of unusually large number of elephants. 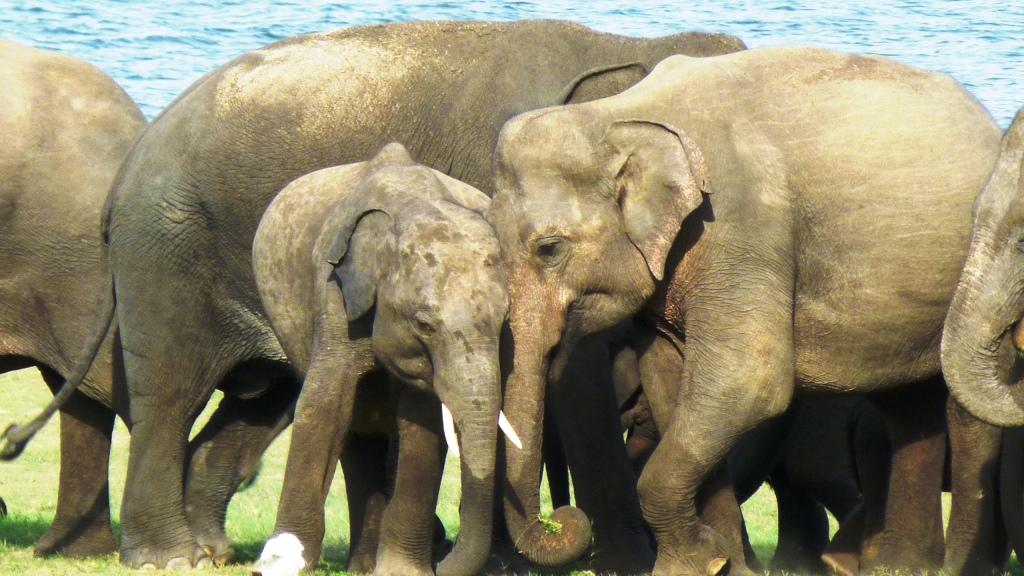 In the late 1990s, awareness grew that viewing wild elephants in Minneriya was possible, without having to spend long hours in trying to locate animals. From the cool comforts of star class hotels in the Dambulla and Sigiriya regions, in less than half an hour, a visitor can be at the park entrance and then in another 40 minutes or so, drive through reasonably good tracks to reach the open plains of the Minneriya tank. One has to only park the vehicle and wait patiently, when around 3.30 or 4.00 pm the ‘performance begins’, as the elephants gradually come out of the forest cover to feed and water.

In the light of this, it may be interesting to look back on a little- known story of how the branding of ‘The Gathering’ took place.

Gehan de Silva Wijeyeratne,  who was then attached to the Jetwing group (now back in the UK ), had his office close by to  where I was working, at Serendib Leisure Management as the Chief Executive Officer. One evening, Gehan called me up and asked me whether we could meet up in the evening for one of our regular informal chats. We met up at the Nawam Mawatha ‘executive watering hole’, the White Horse Pub and spent the evening trading stories about our wild life encounters. A key part of this conversation was this unique congregation of elephants at Minneriya, which was fast becoming a popular attraction to tourists.  Local safari drivers were taking tourists to see the elephants and Gehan had recently published an article on this phenomenon in a media brief format, and wanted the tourism industry to recognize it as an internationally significant event and brand it. He had emailed me, and a few of the other large corporates in tourism drawing attention to his media brief cum article. Because of my senior role in the industry and background in studying elephants, he thought I would be an ideal person to be a co-champion in branding and popularizing this event. 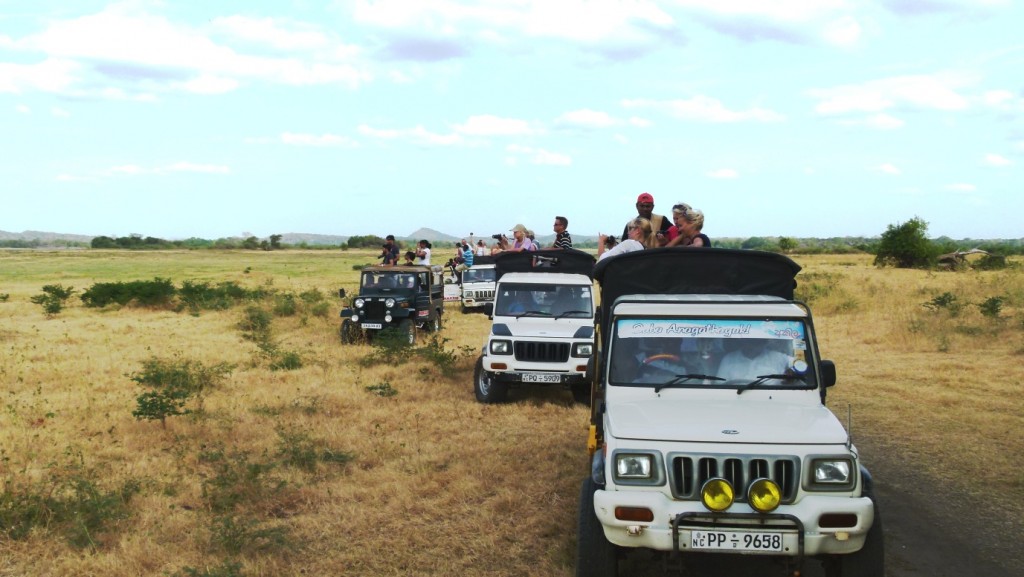 Being serious wildlife enthusiasts working for conglomerates, with subsidiary companies in the tourism industry, Gehan and I had both been observing the Minneriya elephants  for several years now. We agreed that I would use the resident naturalist at one of the Serendib Group’s hotels,  Sigiriya Hotel, to keep counts and carefully monitor the elephants over the forthcoming years. Gehan suggested the use of the word ‘Gathering’ to identify this phenomena, and over several beers, and further discussions, both of us concluded that ‘The Gathering’ would be an ideal name for the annual Minneriya elephant congregation.

Being frequent writers about wildlife and tourism, we started using the name ‘The Gathering’ to describe this unique elephant congregation. Very soon the name seemed to ‘stick’ with tour operators, wildlife authors and journalists alike, who also started to use this ‘brand name’ to describe the attraction. We also ‘roped’ in a good friend, another tourism and wildlife professional, Chithral Jayatilake, Head of Eco Tourism, John Keells Hotels, who gave his whole hearted support to popularize the brand name ‘The Gathering’.

With all these efforts, today ‘The Gathering’ has become a world renowned ‘brand’ for Sri Lanka and Tourism. (a quick Google search for Gathering, Sri Lanka gave 1,550,000 results )

Given that the branding is a complex, strategic and important process of marketing, backed by good evaluation, planning and analysis, it is rather interesting to think back now, that the branding of the ‘Gathering’ took off on such a spectacular ‘journey’ by an act of ‘swift strategizing and inspiration’ by two individuals swapping yarns, in a smoked filled bar one evening! 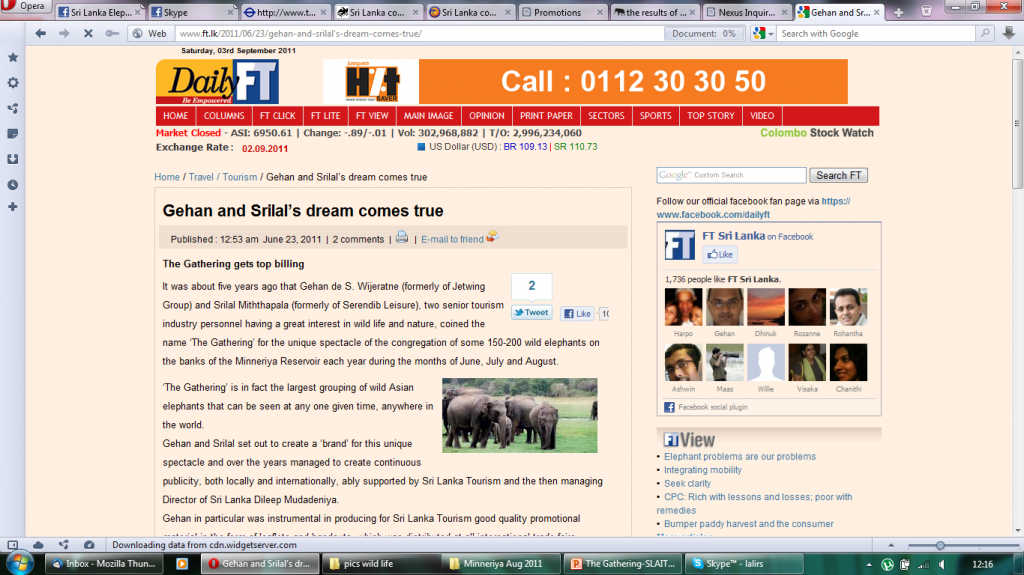