Home » Stories » Other » Elephants Find a Place in Cricket Cup

HAMBANTOTA, Sri Lanka, Feb 15, 2011 (IPS) – Sri Lanka goes into a frenzy this month as it plays co-host to the 2011 Cricket World Cup. Conservationists hope the national pasttime will share national and international media attention with an endangered Sri Lankan resident: the elephant.

After all, the World Cup’s mascot is Stumpy the Blue Elephant, who is likely to find some real life friends as the games go rural, with some of the matches to be played in grounds outside the capital Colombo.

One such city is Hambantota, some 200 km southeast of the capital. Here, the newly built cricket stadium is just one of the region’s large projects, along with a recently opened port. Plans for a new airport, an extended rail track and new highways are under way.

The rapid development in places like Hambantota has left the elephants with a shrinking natural habitat, placing them in conflict with humans. In 2009 alone, more than 220 elephants died in confrontation with humans; 50 people are also estimated to have perished. 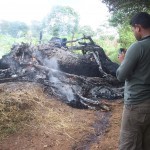 The Hambantota stadium stands in the heart of elephant country, and illustrates how development fails to fully account for sustaining the elephant population, says elephant conservationist Manori Gunawardena.

“Development needs to be inclusive of the wild life if it is to survive,” Gunawardena told IPS. “Relocating elephants into national parks or away from areas of development is not the answer to this question.” Relocations remain suspended after a tusker died while being transported in late 2010.

Even three decades after the development programme began, the conflict between humans and elephants continues, often unfolding like a cat-and- mouse game.

In Konweva, a village at the edge of the north-western Kurunegala District some 170 km from the capital Colombo, elephants emerge from the jungle as dusk falls and amble into the fields, crossing the road in front of a military camp.

In the village, located where the shrub jungle ends and the paddy fields begin, 50-year-old farmer Immihami Mudiyanse and a young woman named Shanika Ekenayaka kept watch, waiting for the elephants with this IPS correspondent.

As twilight covered the grass field next to the road, a dark figure appeared from within the trees. “There, I told you, they will come,” Ekenayaka said. As the first elephant crossed the road and moved into the paddy field, another appeared at the edge of the jungle. “Another sleepless night,” the farmer said.

A new 11-million-dollar pilot project funded by the World Bank is seeking to change the manner elephant conservation has taken place thus far in Sri Lanka. “From conflict to human elephant coexistence, that is what we want to do. The fundamental change is to look at the problem from the animal’s side as well,” Sumith Pilapitiya, lead environmental specialist at the World Bank, said.

Nine new pilot projects are to be launched in mid-2011, five in the southern provinces and four in the north-western provinces. Pilapitiya told IPS that project planning took into consideration years of research and, for the first time, had the Wildlife Department and Forestry Department working together on an elephant conservation project.

One of the major changes envisaged is in the placing of electric fences, used extensively in Sri Lanka to deter elephant attacks. The usual practice is to place the fences on the boundary of the national parks or areas coming under the Wildlife Department.

But the World Bank official told IPS that elephants were known to break the fences in search of food in areas recently cultivated near the jungle. Those tracks often fall under the Forestry Department.

“The idea is to set up the fence on the ecological boundary depending on elephant roaming patterns,” he said. The new project also proposes a novel approach to development taking place in close proximity to elephant habitat. Pilapitiya said that the past practice was to set up electric fencing around the new project.

“The elephants then are likely to move into nearby villages when food becomes scarce,” he said. “The new approach is to set up the fence around the villages as well.”

Conservationists also want developers to bear the cost of protecting such villages and conservation efforts rather than palming them off to the government.

Both Gunawardena and Pilapitiya told IPS that human-elephant conflict was at its worst where resettlement near elephant habitat had taken place in the last 50 years. “Where indigenous people have lived for generations, we hardly see such conflict,” Pilapitiya said.

The new World Bank project envisages creating such life-saving awareness and will also try to create income opportunities for villages through elephant safaris and tourism. (END)
Send your comme