There have been numerous inquiries through Sri Lanka Elephant Web Page (https://www.srilankaelephant.com) and the Sri Lanka Elephant Facebook group (http://www.facebook.com/SriLankaElephant), as well as from other sources, as to whether there has been any further news about ‘Walawe Raja’, since we called a halt to the “Find Raja Project” in January this year.

Readers will recall that the idea to launch a search for this elephant in and around the Uda Walawe National Park (UWNP) came about due to the fact that he did not make his customary appearance at UWNP during the months of May, June & July last year. ‘Walawe Raja’ was possibly UWNP’s most treasured exhibit, a majestic tusker, in the prime of his life who frequents the park during the drought period from July to October each year. Very often he is in musth and spends most of his time searching out receptive females in the herds. During the balance period of the year, no one really knows where he disappears to, and in all probability he wanders out of the northern or north eastern side of the park, towards the Hambegamuwa region. Over the years his right tusk has got damaged, and he is now easily identifiable due to this. His visits to the park have been very regular for several years, and researchers working at UWNP have sighted him every year during this particular period. 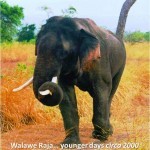 The growing concern that he was not sighted last year, was compounded by the fact, that when he was last seen in late 2009, he was carrying a bad wound on his trunk. He was finding it difficult to take water into his trunk due to leakage out of the perforation. The veterinary team at UWNP had been treating him for a while. 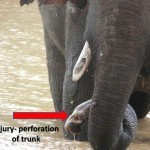 Between late October 2010 and January 2011 we made over 20 excursions just out side of the North Eastern areas of the park, tracking down leads of possible sightings. Through extensive discussions with villages we came to the conclusion that Raja’s home range could be in and around the Hambegamuwa region. It was frustrating work, and there were many false alarms, and hopes raised, only to be dashed to the ground. We came across several carcasses of elephants who had died due to gun shot injuries. We also ran into the controversy and protest regarding the Dahiyagala Sanctuary. 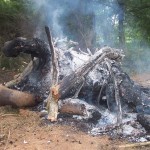 Burning carcass outside the park 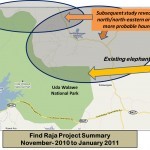 All in all it was quite an interesting exercise, although unsuccessful. We were able to educate and talk to over 100 villagers, and     thanks to the media support from the Sunday Times, managed to create considerable interest and          awareness among the general public. We were able to carry out the logistics due to generous support    from few donors (who wished to remain anonymous), as well as technical support from Dialog Axiata    Pvt. Ltd.

So what really could have happened to Raja? Hope is certainly receding now, as there has    been not even any tentative sightings of him to-date. So there could be three scenarios that one can think of The first, optimistic possibility is that he is still alive, but due to his weakened physical condition (due to the injury on his trunk), he has not come to musth (musth is a cyclic sexual phenomena which manifests itself in mature, healthy male elephants). Hence, his desire to come into the park (which was to seek out receptive females) would not be such a priority now, due to his weak condition. So possibly he is biding his time somewhere in a secluded place until he regains full health.

The second more pessimistic option would be that ‘Raja’ has succumbed to his injuries and died. When elephants are suffering from serious injuries, they usually linger around a secluded area where there is water and food. This is the reason why most often, carcasses and bones of dead elephants are found in remote secluded areas, giving rise to the myth of elephant grave yards. So possibly the great ‘Walawe Raja’s bones could be in some uninhabited area, as his remains slowly decay back into the soil. This could possibly then answer the question as to why, if he has died, no one seems to have seen the carcass. In fact if some villagers had stumbled accross his carcass, there would have been some information that would percolate out, since his tusks would have attracted a lot of attention, unless of course they have been furtively removed by someone.

The last and third possibility is based on some observations made on musth elephants and their ranging behaviour in India. Apparently as the elephant grows old, even though he is in musth, he could face strong competition from other bulls in ‘musth’ or even bulls who are not in musth. Hence, due to his weakened physical strength he can begin to change his home range to an area where there is less competition. This could bear some logic, as UWNP has two other mature tuskers; (‘Sumedha’ and ‘Kalthota Raja’) who up until now, still could not pose a threat to ‘Raja’ , and have been patiently ‘waiting in the aisles’ for their chance to dominate. There are many well documented sightings of how these two tuskers, both in prime condition, beat a hasty retreat when Raja appears on the scene. In addition, UWNP has several other mature bulls in prime condition, who come to musth periodically and who could give a weaker bull in musth, (even though he is senior in the hierarchy ) a good ride for his money. To follow up on this last hypothesis, one will have to assess what could be an alternate home range for an ageing ‘Raja’ in poor health. To satisfy his natural instincts, such a home range should include a reasonable amount of herds with adequate females, and a lesser number of mature bulls. The only such area that could meet these requirements would possibly be the Lunugamwehera National Park (LNP). There is well established corridor between UWNP and LNP along which ‘Raja’ could have perhaps moved along. However, there have been no recorded sightings of such an elephant with the characteristics of ‘Raja’ from the Lunugamwehera area, but on the other hand unlike in the UWNP North Eastern area, villagers have not been made aware nor sensitized about the search for such an elephant. As one last resort we hope to undertake one or two ‘reccés’ in Lunugamwehera and to do some preliminary investigations and inquires, armed with our ‘Raja’ identity – kit photographs.

Until then of course there is nothing much that one can do. The forthcoming months of June, July & August will be very crucial, to observe whether, by some remote chance ‘Walawe Raja’ does turn up, back at UWNP according to his schedule.

Until then I am afraid ‘Walawe Raja’ is MIAPD (Missing In Action, Presume Dead).