The fall of the Tusker

Home » Stories » Clippings » The fall of the Tusker

In Sri Lanka, the elephant has had a very close association with the people, culture and religion of the country. It is estimated that the beginning of the 19th century, there were some 10,000 wild elephants in Sri Lanka (Mackay, G. M. 1973), but in subsequent years, indiscriminate capture and hunting led to the destruction of thousands of elephants. The remaining populations are mostly smaller, isolated and fragmented, because their ancient migratory routes and habitats have been disrupted by expanding human encroachment. This fragmentation of habitat has increasingly brought wild elephants in conflict with man. 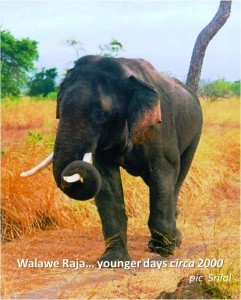 Today, the human elephant conflict (HEC) has transcended from a basic wildlife management problem to a major environmental and rural socio economic crisis in Sri Lanka. The Department of Wildlife Conservation (DWLC) has recorded that 1369 elephants have been killed in the last 10 years, while during the same period more than 500 humans have also lost their lives.

The DWLC estimates that Sri Lanka has around 4,000 to 5,000 elephants in the wild, and that on the average HEC results in 150 elephant deaths per year, and 50-70 human lives per year.( DWLC Web Site) Due to the ranging behaviour of elephants, it is most often solitary bull elephants that face most of the conflict in their search for food, water and receptive females for mating. Of the 1369 elephants killed over the past 10 years, the DWLC estimates that 68% were healthy adult bulls. Hence this is of great concern for sustaining a viable wild elephant population. Given the fact that only male Asian elephants have tusks, and the fact that the Sri Lankan species has one of the lowest incidences of tuskers of around 7.3% of the male population (Hendawitharana W, Santiapillai C, et.al 1994), there are definitely enough reasons and more, to be concerned about the future of the tuskers among the Sri Lankan wild elephant population.

A blessing and curse

All species of elephants have tusks. In the case of the African species, both male and female have tusks, while in the Asian species only males have tusks. Among Sri Lankan elephants, the incidence of tusks in males is one of the lowest of the Asian sub species, with only around 7% males having tusks. The tusks are really the two front upper incisor teeth of the elephants. The tusks being a biological product, are composed of ivory which in turn is mainly made up from calcium and phosphate and other minerals. (Shoshani , J. 1992) Only about 2/3rds ofthe tusk is exposed, while the balance 1/3 lies embedded in the skull. Asian elephants sometimes sprout small tusk like protrusions, which are called ‘Tushes’. Although they are also incisors (the 2nd set), they are not really tusks. They do not have a pulp cavity and grow only up to about 6 inches and are seen in both males and females.

Number of tuskers in captivity

With the banning of the capturing of elephants from the wild in 1960s, the captive population of elephants has been dwindling over the years. From about 300 elephants in captivity in the early 1980s, this number has drastically reduced to around 120 elephants today. Given the demand for captive elephants and tuskers in particular, for religious ceremonies in temples, there is a high demand and value placed on the remaining captive tuskers.

Distribution of tuskers in Sri Lanka

It has been shown that the tusker population in Sri Lanka is relatively small. However, within this small population, there is sufficient reason to believe that there appears to be a high incidence of tuskers in certain areas of the island. These include the North Western and North Central provinces as well as the South East area (many photographers have been able to capture in one frame, upto three or four tuskers in the Kalawewa area regularly, while Yala being the most popular national wild life park has recorded many iconic tuskers over the years. Although living mostly within the protected area of the Yala National Park, several of these magnificent tuskers have met an untimely death when ranging outside the park.

The demise of tuskers

Records indicate that in ancient times, Sri Lankan male elephants did have a greater abundance of tusks. History has it that Sri Lanka elephants could be well trained to be used in war and that they were exported in large numbers to the Middle East (Groning,K&Saller, M 1999). Most of these war elephants were tuskers. Hence, from a seemingly healthy and abundant wild tusker population in the past century, there has been a drastic reduction of tuskers in the wild in Sri Lanka. In the mid- 1800s, to make way for the expanding plantation sector, there was an open warrant given with a bounty, for hunters to kill elephants. This became a sport, and most of the hunters searched out the bigger males carrying tusks, which was a bigger challenge and prize. Hence thousands of elephants were destroyed during this period, and it could be surmised that a large proportion of these animals killed were tuskers. To further compound the problem, rapid development resulted in unplanned human settlements being set up in traditional elephant lands, fragmenting their movements and restricting their migratory patterns. This would have curtailed the movement of the few remaining tuskers, thus effectively isolating the gene pool, reducing cross fertilization among herds, and in turn reducing the proliferation of the tuskers in the wild. Evolution also may have been taking its course, and selectively reducing the number of tuskers because they were the most robust of the males who would take the greater risks in searching for food, newer habitats and receptive females, thus having greater altercations with humans and having a greater mortality rate.

There is very little hope that a healthy and robust tusker population in the wild in Sri Lanka will grow, or for that matter even be stable. The habitat is far too fragmented to sustain a healthy breeding population of tuskers in the wild. However, if some concerted efforts are made to firstly identify if certain areas do actually have a higher incidence of tuskers, and if so, protect and carefully manage these populations, perhaps we can at least try to sustain some tuskers in select areas.