There is a vast increase in the number of incidents of human- elephant conflicts which had resulted in the killing of both human and elephants specially in the rural parts of the country, Pathirathne said. Strong physical barriers are to be built around the conservation centers to prevent these animals trespassing in to villages. “We have planned to build grasslands and waterways which are essential for elephant existence in these conservation centers,” Pathirathne said. “Translocation of elephants in various national parks, which we did earlier has proved a failure as elephants manage to return to their original inhabitants walking many kilometers. 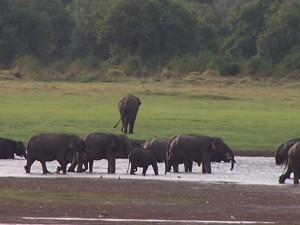 In unfamiliar environments, elephants have become more aggressive and this has worsened the conflicts,” he said. The project is to cost a massive budget as one kilometer of the physical barrier along would cost around 90,000 U.S. dollars. Marking the highest density of wild elephants in the Asian continent, this year’s island wide elephant census revealed there are 5,879 elephants in Sri Lanka.