A school in Uhana  ( in the Ampara district of Eastern Sri Lanka) has been closed after four wild elephant invaded the school premises yesterday (May 04). Police and wildlife officials later drove away the elephants, but not before the children were taken from Udayapura Vidyalaya to a safe location. Wild elephants invade the village due to the loss of their habitats 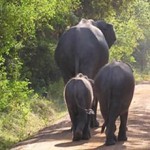