Jumbo runs amok in the suburbs of Colombo

There was panic for a moment along the main road in Rajagiriya yesterday morning when an elephant ran amok near the Welikada police station after its caretaker lost control of the elephant. However, the animal was brought under control after some time. According to the caretaker the elephant that was brought to Sri Lanka from Myanmar some time ago was being taken from the Kotte Raja Maha Viharaya to the Defence Ministry for a function when it got disturbed and ran amok. 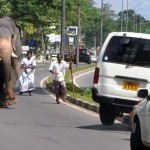 Anxious moments in the suburbs of Colombo