Another elephant bites the dust…

As reported by  (AP/Chamila Karunarathne)

A wild elephant, was shot and seriously wounded allegedly by farmers. It is lying in a paddy field at Palugaswewa, some 220 kilometers (136 miles) from Colombo, Sri Lanka, Saturday. 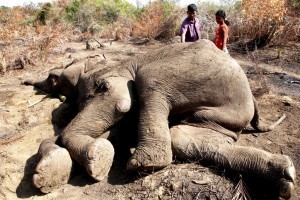 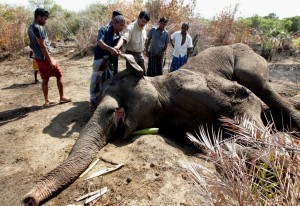 Wild elephants are increasingly entering villages in search of food, rampaging through houses, destroying crops and killing an estimated 50 people a year. Around 250 elephants are killed annually, mostly by farmers defending their crops or villages. Thousands of wildlife officials and volunteers have taken up positions on treetop huts near reservoirs and watering holes for Sri Lanka’s first national count of its dwindling wild elephant population.as reported by