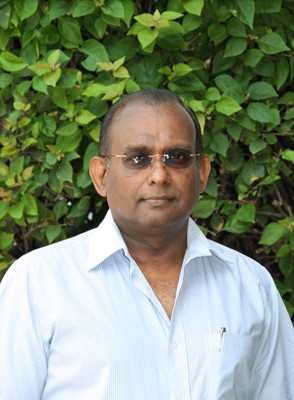 Sri Lanka Elephant was founded by Srilal Miththapala, a keen wildlife enthusiast, with a penchant for wild elephants. He has been observing and studying wild elephants in their natural habitat for over 20 years now in the wild life parks of Sri Lanka, particularly the Uda Walawe National park. Being the park he is most familiar with and he carried out a research project on the Population Dynamics and Mobility Patterns of the Elephants in the Uda Walawe National Park under the auspices of the US Fish and Wildlife department.

He has regular job working in the hotel industry. The entire family, his wife Geetha, son Dimitri and daughter Dushinka are all die hard wildlife enthusiasts. Living primarily in the city of Colombo he would be much happier living in the wild, closer to the nature.

Srilal conducts lectures on elephants around the Island for various communities. Enlightening school children on the ongoing conflicts and why it is important to conserve is one of his major endeavors. He has covered various age groups ranging from Grade 1 to A/level student to universities to other gatherings of elephant enthusiasts.

Apart from observing wild life and nature, he is also a serious amateur photographer.