Two sloth-bear deaths within the last three months at the Yala National Park are being thoroughly investigated by the Department of Wildlife Conservation (DWC) following fears by both officials and tourists that there may be cause for concern over the well-being of this endangered species. “We have more or less ascertained that one died of a respiratory infection which had resulted in pneumonia and the other may have been the victim of a snake-bite,” assured DWC Veterinary Surgeon, Dr. Vijitha Perera who is based at the Elephant Transit Home at Uda Walawe, explaining that they are looking after a third ill bear there. 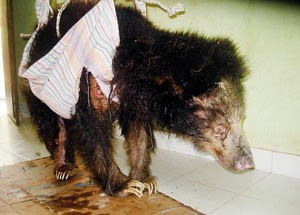 The DWC went on alert when a bear which looked ill was found dead when officials tracked it in the evening on July 2, the Sunday Times learns. Earlier on June 27, they had picked up another which could hardly walk. The dead bear’s head was sent for investigation to the Faculty of Veterinary Science, University of Peradeniya, Dr. Perera said and the findings indicate that it was pneumonia. The bear was also quite old, about 20 years, and may have been weakened by bite wounds suffered in fights with other bears. The other one which could barely drag itself is now being treated at the Elephant Transit Home, the Sunday Times learns. It too had a respiratory infection, along with a severe weakness of the hind-legs. “This bear is also quite old, about 25 years, and we have treated it for the infection. Now it is feeding well but the legs are very weak,” said Dr. Perera, explaining that they have ruled out distemper. It is not using its right leg at all and we are carrying out more tests to find out what the cause is.” The second bear found dead on August 18 was a cub of about 18 months, said Dr. Perera, pointing out that tourists had seen it coming to a water-hole and collapsing. The dead cub had been sent to Peradeniya for tests and it is suspected that it had been bitten by a snake. A few more tests will be needed to confirm this.

With the two deaths, DWC officials have been on alert, checking bear movements closely, the Sunday Times understands, and had seen three bears in four days, indicating that things are normal. When asked whether there were any reports of bears being in trouble at the Wilpattu National Park, Dr. Perera said officials there indicated that one bear had been injured in a fight with others. Its ear had got torn and officials are keeping a tab as much as possible. So far there does not seem to be any major illness or threat to the sloth bears in the National Parks, assured Dr. Perera.