A visit to Horton Plains….

Most often my sojourns into the Wild Life Parks of Sri Lanka are normally centered around elephants, my pet subject. Recently however I decided to give wild elephants a break, and took time off to make a visit to Horton Plains, after a lapse of about 10 years. I also planned to spend time out in the plains themselves, rather than join the mass excursion, trekking to see the much over-visited Worlds End and Bakers Fall.

I booked the relatively newer Maha-Eliya Bungalow, where I had not stayed before. Certainly Maha-Eliya has a spectacular view of the plains, as opposed to the Ginihiriya Bungalow (former Anderson Lodge) which, though more spaciously and aesthetically laid out, is situated in a depression, limiting any good views. It is a pity when designing the Maha-Eliya Bungalow, no thought has been given to provide a lounge or sitting area for visitors which is a fundamental need in such wild life circuit bungalows. As it is, the ‘bungalow’ (if one could call it that), is no more than a well-furnished dormitory! 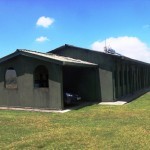 Horton plains which was officially declared a nature reserve in December 1969 and subsequently elevated in 1988 into a National Park, is one of the smaller National Parks in Sri Lanka, of undulating plateaus of about 3160 hectares, situated at an elevation of some 2200 meters. The gently rolling, uneven valley landforms have a net work of streams and channels with three of Sri Lanka’s major rivers, the Mahaweli, Walave and Kelani, all having their origins from the plains. Sri Lanka’s second and third highest mountain peaks are found here viz. Kirigalpotta (2389 m) and Thotupolakanda (2357 m). The climate is typical wet montane, with annual temperature of 14-16? C, and relatively low humidity of 65%. Over-night frost is fairly common during the months of January, February and March, with temperatures dropping to around 5? C with strong gale force winds at times. It is said that Horton Plains is the coldest and windiest place in Sri Lanka. (Anslem de Silva- The Diversity of Horton Place National Park 2007).

The wet and windy weather conditions have resulted in the development of an even, low canopy forest, with low branched, twisted and stunted trees with a dense under growth. The forests occupy the upper slopes and hill crests, while the wet patana grasslands cover the lower slopes and valleys. Due to the climatic conditions, Horton plains is rich with flora, which support communities of lichens, tree ferns and mosses. It is listed as an important Ramsar wetlands site. 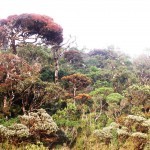 The forest canopy, with signs of die -back 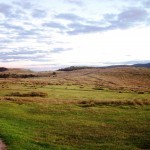 Most of the plants species found on the plains are endemic to Sri Lanka and Horton plains is considered Sri Lanka’s only cloud forest. The flora of the plains is represented by 57 species of vascular plants belonging to 44 genera and 31 families (Balasubramaniam, et all, 1990). Of these 57 species, 29 species are endemic to Sri Lanka and 18 species are confined to the montane forest of Sri Lanka. With fog cover during most nights and the low temperatures, evaporation is slower, so that the forest does not need much rain to nourish its lush vegetation. . 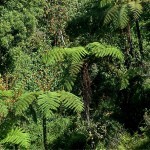 The area is said to support some 24 Mammals which include Leopards, sambhur, shrew, wild boar, 3 varieties of primates, shrew, barking deer and otter. Elephants did habitate this area, but disappeared by 1950 due to incessant hunting. (Warner Wolfgang, ‘Sri Lankas’ Magnificent Cloud Forest). Horton Plains is a bird watchers hot spot with about 87 bird species been recorded in the area, of which 14 are endemic. There are 9 reptile and 8 amphibians species also found in the area ( IUCN/IWM Sri Lanka Wetland Database 2007)

As my son and I drove through the entrance at Pattipola, and the cool climate soaked in, while the refreshingly effervescent air rejuvenated us. I was happy to meet up with some bungalow keepers I had known at Uda Walawe, who were now at Horton Plains. Talking to them at the Farr Inn, which has now been converted into an office for the Department of Wild Life Conservation ( DWLC), they told me that the number of Sri Lankan visitors had reduced over the past few years, which perhaps ironically is a good thing. There was a time when busloads of Sri Lankans descended on this magnificent bio-diversity hot spot, just to make merry make and drink and sing, without any interest in nature or the environment.

(There was an interesting episode that took place when I tried to obtain the figures for 2010 from the DWLC. I was sent from pillar to post, from Director to Director, and in desperation had to even to speak to the Director General himself. However, I was still unable to obtain the information, since I had to make a formal written application. The DWLC is a public entity, and what I was requiring was basic arrival figures, -not some ultra- sensitive information- which I guess, as citizen of this country of this country, it would be my right to know. It is a pity that I am compelled to add this as a foot note, when the overall thrust of this article is to highlight some of the good work that seems to have been done at ground level by the DWLC !!!)

Horton plain was one of the most over visited parks, resulting in huge environmental problems due to litter, especially plastic and polythene. One of the serious environmental issues facing Horton Plains today is the ‘die back’ phenomena of the forest, where the under- growth and forests gradually deteriorate away. Many reasons have been attributed to this, most of them having roots to pollution and environmental deterioration possibly due to over visitation. Today it is estimated that some 50% of the canopy forest of Horton plains has been affected by die-back. (Anslem de Silva- The Diversity of Horton Place National Park 2007).

However I was most surprised and happy to notice that area was quite clean, and I was told that the administration is now very strict with visitors bringing in any form of polythene or cigarettes and matches (forest fires have also been a major issue at Horton plains). Perhaps the ongoing support of some private sector organizations to Horton Plains has helped. It appears that this is a very successful programme, and perhaps the model can be replicated in other national parks also, to pave the way for a healthy Private-public corporation.

There were of course quite a number of serious visitors including foreigners, in smaller vehicles such as vans and mini busses, and also, believe it or not, quite a few ‘tuk-tuks’. I am told that this is quite popular, with the tuk-tuk drivers ferrying visitors from the railway stations of Ohiya and Pattipola. How they negotiate those steep climbs and bends is another matter!

However, my bungalow keeper friends did mention that during the school holiday season there is still an influx but, certainly not as bad as before and, as always, the main attraction is Worlds End and Bakers Falls. I was quite happy to give all of this a wide berth this visit, and soak in the terrain on my own, far from the madding crowd.

The two days spent traveling around and taking short treks around the Maha-Eliya Bungalow was just out of this world. The almost ghost-like terrain, with the wind howling at times, made me feel that I was in an alien place. The spectacular colours and shapes of the mountain and cloud forest, contrasted with the undulating patana, plains and shrubs, with the rising sun casting long eerie shadows.

Sambur is the main large mammal that can be seen at Horton Plains, and see them we did ! I cannot remember seeing such large numbers. We had many excellent sightings of both solitary males, mothers and calves and small herds. I am told that the current population may be reaching 2000 now. There is debate whether this is in excess of the carrying capacity of the area. Interestingly however there are regular leopard sightings being reported as well, which then means that natural control of the sambur population should be still in place. 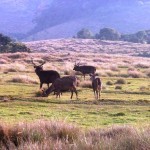 A sambur family out on the plains 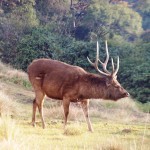 The DWLC bungalow keepers are in the practice of encouraging, on the sly, a few animals to get used to frequenting the area around their bungalows, by feeding them. These semi-wild animals then are a big attraction to the visitors. However I believe the bungalow keepers do this also out of sheer loneliness, to have a companion, while they live alone in the ‘middle of nowhere’, sometimes for days together, when there are no bookings for the bungalows. Thimbiriyamankada bungalow at Uda Walawe Park has its resident wild boar, ‘Edward’, Seenugala bungalow its elephant , ‘Seenugalaya’, and the giant squirrel ( well fattened on chocolate biscuits)

Now my friend the bungalow keeper at Maha-Eliya, was no exception, and had cultivated a young sambur who hangs around the area to solicit food from visitors. We christened him Joseph, as he visited us soon after we arrived, and generally hung around right throughout our stay in the bungalow. 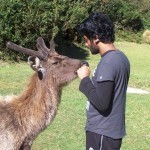 Surprisingly we were not all that lucky with birds but did have some good sightings of jungle fowl and the Sri Lanka wood pigeon, both endemic birds, as well as bull bulls, bee-eaters, swifts swallows and a fairly close sighting of the Eurasian Blackbird. We also had a fleeting glimpses of the Whistling thrush or Arrenga, and the dusky-blue flycatcher, both endemic to Sri Lanka. Furtive excursions late in the evening to try and spot the elusive leopard was unsuccessful. 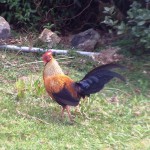 The night sky was a riot of bright pin spots of stars, the density of which I had never seen before. I guess every single galaxy, star, constellation and planet that could be seen in the southern hemisphere, was visible that night. We wondered for a moment whether we were inside a planetarium. The particularly clear night, the higher altitude, and the absolutely pollution free atmosphere made this all possible I guess. The night was biting cold, but to stand outside, with teeth chattering and knees wobbling, to see such a glorious spectacle, was fully worth it.

The warm soup, tasty rotti and lunumiris and dhal, cooked in a way only as the bungalow keepers know, with the taste enhanced by the ambiance of the place, topped with a warm cup of coffee, made us wonder….. Perhaps, after all there is a small piece of heaven here in our small island home of Sri Lanka.